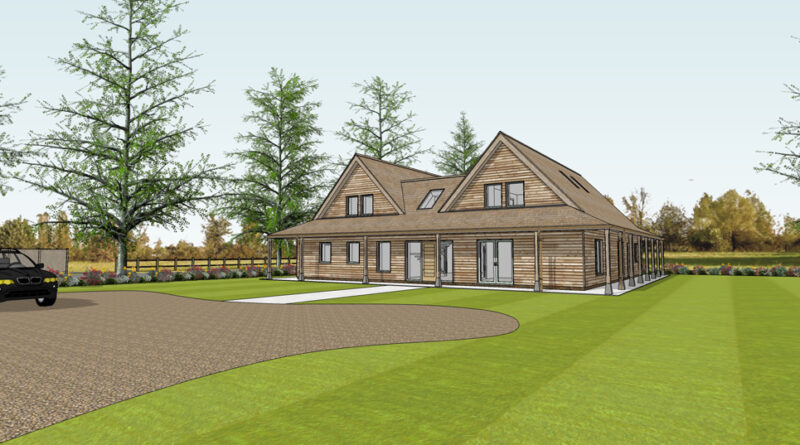 Planning permission was granted in August 2019 for the replacement of an existing 303sq.m house with a new 506sq.m timber-frame home within the Surrey Heath Greenbelt.

An application was submitted to extend the original dwelling using Permitted Development Rights, i.e. without the need for further planning permission, by adding a large side extension, two separate rear extensions and alterations to increase the roof space. The resulting extant approvals would have allowed the house to be increased to over 413sq.m footprint and a width of nearly 30m.

The proposed replacement dwelling was smaller than the extant permissions in terms of footprint, gross external area, volume, width and depth and as such created “very special circumstances” which allowed the planning officer to accept this increase over the existing house.

The proposed new dwelling has been designed on the Principals of Vastu, an ancient Indian architectural proportioning and well-being system while maintaining a traditional rural architecture including steep gabled roofs, timber cladding and a veranda surround the property on all four sides.

A 9×9 grid, a completely square footprint based on proportional measurements, a large two-storey central atrium with clear lines of sight through critical parts of the building, coupled with rules defining everything from chakra points, stair positions, toilet orientation, bed directions, percentages of window to wall opening (different on different parts of the building), incoming services positions etc etc have meant careful planning and a host of decisions which have resulted in a clear floor plan.

The position of the house on the site is of equal importance in considering the Principals of Vastu. The house is orientated true north-south, has to avoid water points within certain site lines, has a Vastu ‘fence’ perimeter set at a distance reflecting the proportioning system of the house, and with clear views through certain axis of the landscaping.